If you are finding the Windows 8 User Interface a bit difficult to navigate and long for that Window 7 Feel, Classic Shell is just the ticket.

Classic Shell has been around for a while, but has been recently updated to version 4.1.  This version now fully supports Windows 8.1 and provides several enhancements including the ability to pin and unpin apps to the task-bar and the start button now scrolls together with the task-bar, along with numerous stability improvements.

From the Classic Shell authors “Classic Shell is a collection of features that were available in older versions of Windows but were later removed.” Their goal is to restore functionality that has been removed from earlier Windows Versions in Later Versions.

Classic Shell’s most newsworthy component is Classic Start Menu.  Press the Windows key on your keyboard, and you are presented with a Start menu, just like you remember it from Windows 7, Windows Vista, or even Windows XP.

Start typing to search for programs; hit Enter to launch or use Search, which is blazing fast. You can also pin items to the Start menu, and customize every aspect of the UI. Classic Start Menu is just like the Start Menu you know and love, only more and ready for you to customize to your hearts content.

The Classic Explorer is an optional component of Classic Shell that fixes a few of the changes in Windows Explorer. These include the annoyances by adding a toolbar with common operations such as copy & paste, go to parent folder, etc. Just like the Classic Start Menu, Classic Explorer can be customized to your hearts content. 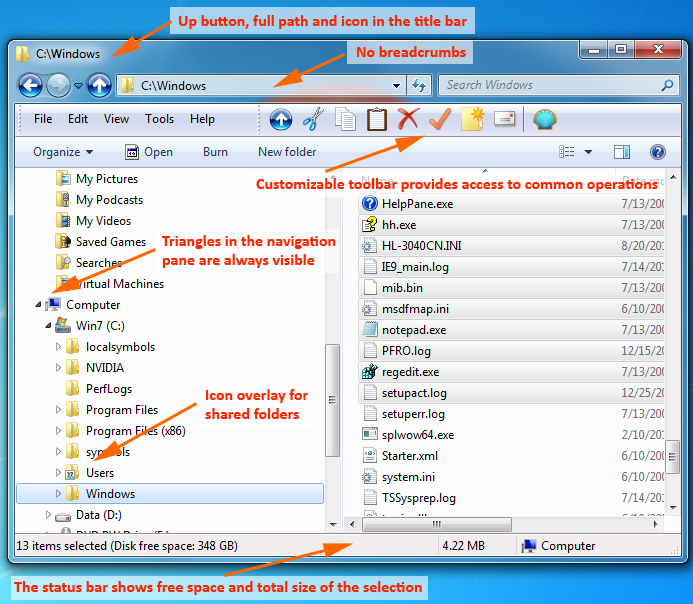 No More Complaining about the Windows 8 User Interface!