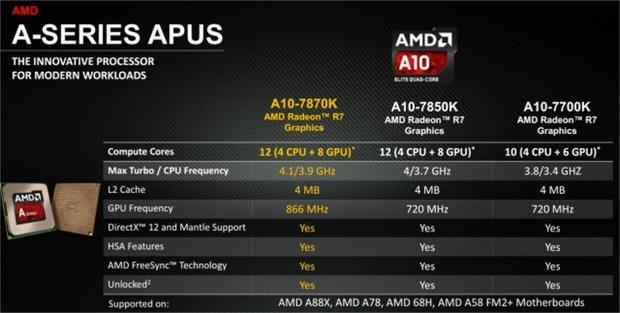 The GPU receives a 20 percent increase in clock speed, to 866MHz from 720MHz. The GPU also features 512 shader processors, 32 TMUs and 8 ROPs. Thermal Design Power for this part remains at 95 Watts. Cooling should not be an issue. This is good news as early AMD processors required significant cooling considerations.

As shown below this chip offers a good choice for those interested in on-line gaming. 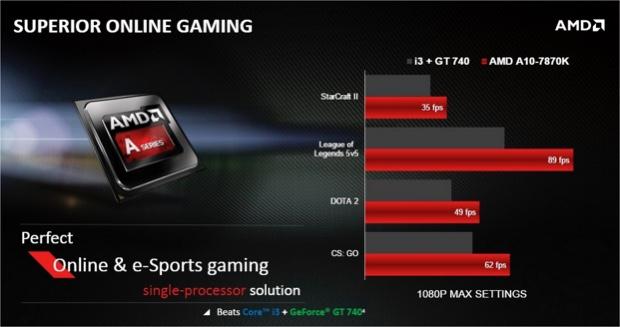 The chip also supports FreeSync frame smoothing technology – also know as DisplayPort 1.2a – which can be found on a number of new monitors from the likes of Acer, BenQ, LG, Nixeus, Samsung, and ViewSonic.

The chip supports Dual Channel DDR3 memory which should be used as the system memory for optimim performance.

DDR3 is a DRAM interface specification. The actual DRAM arrays that store the data are similar to earlier types, with similar performance.

The primary benefit of DDR3 SDRAM over its immediate predecessor, DDR2 SDRAM, is its ability to transfer data at twice the rate (eight times the speed of its internal memory arrays), enabling higher bandwidth or peak data rates. With two transfers per cycle of a quadrupled clock signal, a 64-bit wide DDR3 module may achieve a transfer rate of up to 64 times the memory clock speed megahertz (MHz) in megabytes per second (MB/s). With data being transferred 64 bits at a time per memory module, DDR3 SDRAM gives a transfer rate of (memory clock rate) × 4 (for bus clock multiplier) × 2 (for data rate) × 64 (number of bits transferred) / 8 (number of bits/byte). Thus with a memory clock frequency of 100 MHz, DDR3 SDRAM gives a maximum transfer rate of 6400 MB/s.

The DDR3 standard permits DRAM chip capacities of up to 8 gibibits, and up to 4 ranks of 64 bits each for a total maximum of 64GiB per DDR3 DIMM. Because of a hardware limitation, first addressed in Ivy Bridge-E in 2013, most Intel CPUs only support up to 4gibibit modules for 8GiB DIMMs. All AMD CPUs correctly support the full spec for 16GiB DDR3 DIMMs. 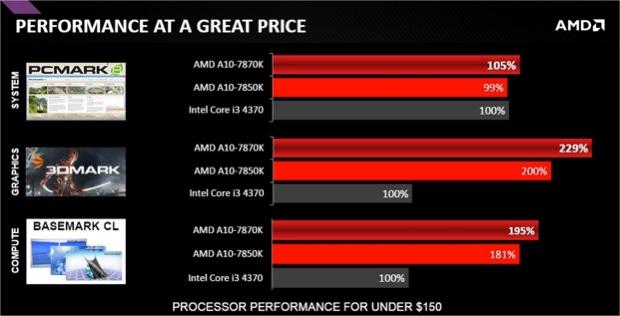 This chip is a good choice for your next gaming system, with a very attractive price tag.