Things to Consider When Buying An SSD

In the early days of the SSD Drives, there were issues with reliability and longevity. Most of these problems have been adequately addressed by the manufacturers, but there are things you  to consider before buying an SSD.

SSD prices have decreased dramatically in the last two years. Today SSD drives are very affordable as you can see below. Today you can buy a 500GB hard drive for under $170 and a top of the line 250GB drive for under $100. You will note that per GB your purchasing $ goes further for the large capacity SSD Drives. 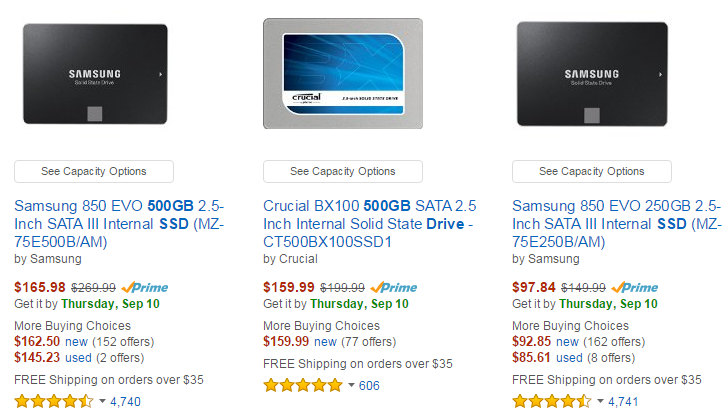 SSDs are still significantly more expensive than traditional hard drives. As you can see below, you can get the latest 1TB hard drives for around $50. You can get twice the storage space for one-third the price, effectively making SSD drives 6X more expensive. 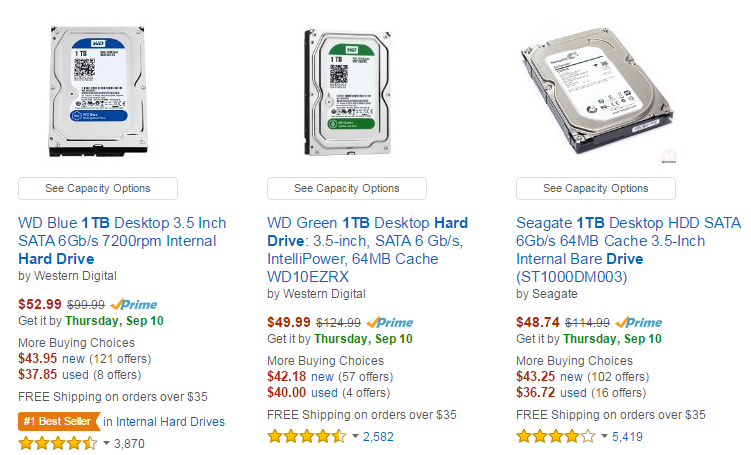 You should know the basic differences between the way SSDs and HDDs manage storage. While HDDs write sequentially and as a result, have to deal with disk fragmentation since over time data becomes scattered on the drive causing slight delays in reading and writing.

SDDs have no moving parts like the rotational hard drive. They read and write to memory. Most SSDs use NAND-based flash memory, which retains data without power. Data is written to SSD drives in pages and blocks. In order for an SSD drive to write to a block that has previously been written to, the entire block must be erased. This requires SSD drives to deal with garbage collection. For those of you that want to understand this further, the graphic below will explain how this works. 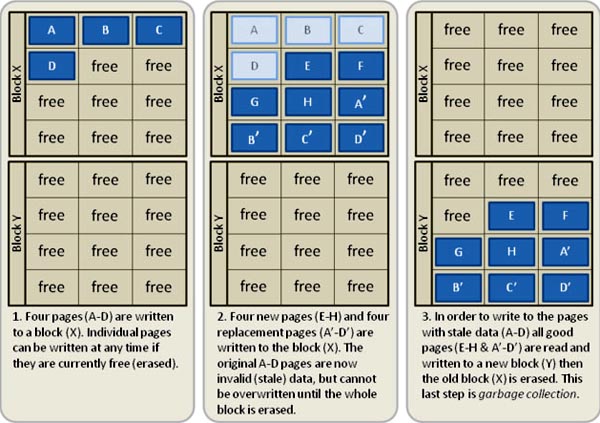 The net result is that information on a specific block must be moved to another block before the first block can be erased. To prevent loss of data, whatever information existed on the block must first be moved elsewhere before the block can be erased. Once the data is moved and the block is erased, only then can new data be written to a previously-occupied block. This requires empty space on the drive to function properly. For this reason, you should only plan on utilizing 80% of your SSD drive for data. Your SSD Drive needs empty space to manage this process. SSD drives manage this process when the drive is idle. For this reason, you should leave your computer on for hours without it being used, so that the SSD drive software can completely manage this process.

The main benefit of an SSD over an HDD is pure and simple speed. SSD drives are much faster than rotational hard drives. Most of the data on your computer’s storage drives is static and only needs to be read, and SSD drives excel in this area.

That being said if you want the very fastest drive, simply compare the sequential read and write speed of several drives before you make that purchase. As a general rule, the drives that are more expensive are faster than the lower cost models. If you are on a budget, even the lowest cost models are much faster than rotational hard drives

Today’s rotational hard drives have a very long lifespan as well, sometimes in excess of 10 years.

Both drives can be damaged and data loss can occur with sudden power failure. Battery laptops are typically immune from this problem since the computer is being powered by the battery anyway.  For desktop systems, we recommend you purchase a battery backup and power your system through the UPS (Uninterruptible power supply). 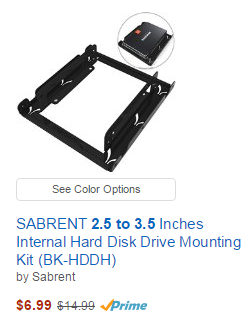 Typically SSD Drives are manufactured in a 2.5″ form factor.  For desktop PC’s any 2.5″ form factor drive will work just fine although you may need a simple adapter to mount the drive (as shown at right).

For those of you on the cutting edge of technology and build your own computers, you may want to spend a bit more and invest in mother-board that supports the new M.2 form factor SSD drives as shown below:

These drives are very small and were originally intended for small and thin laptops and tablets.

These are becoming more popular with desktop enthusiasts. The M.2 interface has a 10G/sec speed vs 6G/sec for SATA drives. As SSD drive speeds increase they will take advantage of this new interface.

When buying an SSD for a laptop you will need to make sure it is thin enough for your laptop. SSD Drives typically are manufactured with a thickness of 9.5mm and 7mm. Many of the 7mm models come with a spacer for the user to allow it to be used in a 9.5mm application.